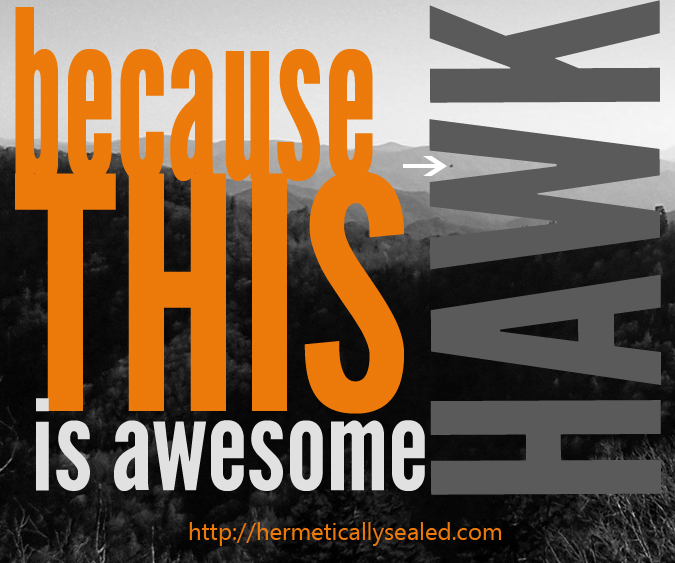 I'm a web developer/sysadmin/host (NERD TRIPLE THREAT!) and this is my attempt to write about...leaving the house. Sometimes. Like, to go backpacking. And take some pictures. And justify spending the money on all the gear WHY SO MUCH?!?

So check back weekly for all the smrt missives! And the dumb tweets!

Feel free to write and complain.

version control doesn't work if you go ahead and upload directly to the server, KEVIN

Ever have your laser printer just randomly stop printing before the sheet is fed through? Does it keep doing it, even after changing toner and doing your regular troubleshooting?

Try printing from a different source.

My Brother laser was stopping when printing my backpacking checklist from geargrams.com. Did it several times in a row. So I printed the list to a PDF file, then printed from THAT.

So you have a domain name that represents you/your business/your family/your cat on the internet. You probably spent a lot of time and (maybe) money to make it great and fun and profitable.

Did you make sure the domain registration is in your name? Is it in your company's name? (I suppose it could be in your cat's name -- there are a a few Mr Whiskers with sites, I'm sure). Needless to say (or, Needing to say, since I"M POSTING THIS FOR A REASON), it's pretty important that your domain name registration reflects the proper ownership of the site.

If you signed up for a super cheap hosting plan that says something like "Free domain!", you might check their terms of service to see who actually owns the registration before you put a lot of the aforementioned time/money/felines into the site. As a matter of fact, do this for EVERY domain you have, regardless of where/when you got it. I see this quite a lot: someone registers a domain for an organization/club/business whatever, and then that person leaves or is incommunicado for some reason and OOPS FORGOT TO PAY EVERYTHING GOES BYE-BYE.

Protect yourself and your investment in your tiny house/vegan sandal rescue blog. Make sure the contact info is correct and up-to-date. Use the Technical and Admin contacts as well. Point them to other responsible people in the organization (your receptionist, or your VP of sales, or your Executive Cat MR WHISKERS THIS IS SERIOUS STOP WITH THE STRING), so if something happens there are multiple ways to find out before BYE-BYE time.

So, ever try to permanent store a self-signed SSL certificate in Firefox whilst in private (PR0N!) browsing mode? Really? ARE YOU SURE?!?

Seems you can't do it, anyways. What you CAN do is first load the site in question in non-private mode, accept the cert permanently, THEN reload site in private browsing and you're good to go.

So, when using the FileManager plugin for TinyMCE and you run into your thumbnail images suddenly disappearing, keep in mind that it does NOT regenerate these if you rename the main image file (this-way-to-candy.jpg has more semantic meaning than IMG_5677.jpg).

Now, to get all the new thumbs to display without having to reload the dialog.

So you've done your research. You've found that obscure piece of gear or ridiculous tchotchke that you simply MUST have. You find the one place that can totally help you self-actualize your commercial acquis -- yeah. Ok. You're just on a web site. The one with that thing you like.

And the site is a total piece of....charming. IT'S ARTISANAL! (but really it's just amateur). It's hard to use. You don't know what's going on EVERYTHING IS BLINKING WHY IS IT YELLOW. Sometimes, it's hard to order. When this happens to me, every part of my being screams out (pancreas included) "I CAN FIX THAT FOR YOU".

But sometimes that crufty web site is well-suited to it's purpose. (I am so getting my web developer union card revoked).

A poorly designed or clumsily executed site can serve as a brake to sales. It's like a governor on a truck. It can keep mayhem off the highways and Tracy Morgan out of the hospital (too soon...?). It also keeps a small cottage business from being completely overwhelmed and risking a hard-earned reputation for quality and great customer service.

Come to think of it, a great web site can act as a crutch for those who aren't willing to put the time and effort into providing a great shopping experience. Technology isn't everything (yes, I gasped there too). Not everyone can build an effective web site, even (especially) with tools that claim to do everything for you with just a few clicks. They just want to have something to point to...anything, really. So an app spits out tables and columns and what is image23_v2.jpg again? and WHY IS IT WEIRD just don't think about it just hope for the best.

Despite itself, it works. Kind of. But enough to keep the sole proprietor as busy as they want to be. As long as they don't want to make changes. And it's easier to just call ON THE PHONE EVEN because putting a new page on the site is traumatic.

See what happened? They've won a customer the old fashioned way, by working around the site's limitations (or they really wanted coffee).

I'm still sure I can make it all better, though (sorry, Tracy).

So it seems I am not the most tactful emailer. I like to think I am just a "straight shooter" who "tells it like it is".

But maybe I'm just an asshole.

I h(ave)(ad) a client who seems to think that way. I tried to tell them in no uncertain terms that how they were going about designing their web site was wrong. Trying to get my complete point across I asked a lot of questions and provided a lot of answers. I perhaps should have just started with

"Is there a better way to do this?"

Instead of basically saying

"You're doing it wrong!"

This is probably why I just write code. Let's try to change that, shall we?

Have you received the yearly GoDaddy ICANN grind email about verifying your contact info? DId you click the link and the form says the credentials aren't valid?

Do you only view emails in text format (like you should, really)?

These two things are related, it seems. Try viewing the GoDaddy email as HTML, then click the little button-thing and you can verify your domain details. Until next year, when you forget and have to figure it our all over again.

GoDaddy is as GoDaddy does.